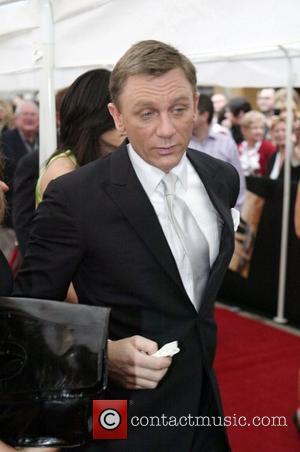 Picture: Daniel Craig The Australian premiere of 'Quantum Of Solace' at the Entertainment Quarter. Sydney, Australia - 15.11.08.

Daniel Craig, in a wrenching departure from his James Bond character, and Liev Schreiber are receiving fine notices for their portrayals in Defiance of two Jewish brothers training others who have escaped into a Belarus forest how to battle the Nazis. Unlike Valkyrie , which makes no mention of the Jews exterminated under Hitler, Defiance attacks the notion that Eastern European Jews went resignedly to their deaths without resistance. A.O. Scott in the New York Times writes that the movie "presents itself as an explicit correction of the cultural record, a counterpoint to all those lachrymose World War II tales of helplessness and victimhood." However, he adds, by implying that Jews living in other areas of Nazi-occupied Europe had not been as tough as those shown in the movie, it "has the effect of making the timidity of the Jews, rather than the barbarity of the Nazis and the vicious opportunism of their allies, a principal cause of the Shoah." Other critics write admiringly of director Ed Zwick's intentions but suggest that they have been clumsily implemented. The movie, writes Robert Lowman in the New York Daily News , "has some compelling scenes but never makes connections." Lou Lumenick in the New York Post remarks that, in Zwick's hands, it becomes "basically an overgrown TV movie. There's mechanical plotting, war movie clichés and pedestrian dialogue." And Claudia Puig in USA Today concludes that the true-life story "is undeniably inspiring and ideally suited for a cinematic rendering. But Defiance resists bold, passionate storytelling and delivers something rather conventional."