Queen Elizabeth showed off her sense of humour by pretending to jump out of a helicopter with James Bond for the London Olympic Games' Opening Ceremony tonight (27.07.12). 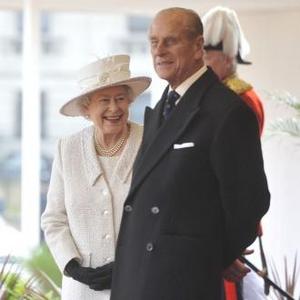 Queen Elizabeth showed off her sense of humour by pretending to jump out of a helicopter for the London Olympics Games' Opening Ceremony tonight (27.07.12).

The 85-year-old monarch collaborated with Daniel Craig, who was in character as super spy James Bond, and director Danny Boyle for a short film which was played at the event and ended with what looked like Queen Elizabeth parachuting into the Olympic stadium in Stratford, East London.

The film begins with James Bond arriving at Buckingham Palace in an iconic black cab and walking down a hallway flanked by the royal's beloved Corgi dogs.

He enters a room to be greeted by Queen Elizabeth, wearing a pale peach dress, with the words ''Good evening Mr. Bond.''

The spy returns the formal greeting by answering ''Good evening You Majesty''.

The pair then walk outside to a waiting helicopter before taking off, leaving the disappointed Corgis behind.

Queen Elizabeth and Daniel/James Bond travel in the Union Jack decorated helicopter past a number of iconic London sights including Tower Bridge, Westminster Abbey and the London Eye before arriving at the Olympic Stadium.

It then appears as if Queen Elizabeth jumps out of the plane followed by James Bond as the theme tune from the spy franchise plays.

However, the royal revealed the joke when she and her husband Prince Philip appeared to loud cheers, where they walked down the Steps in the stadium to their seats before the English national anthem was played.

Earlier Kenneth Branagh quoted from William Shakespeare's 'The Tempest' while later Rowan Atkinson made an appearance as his bumbling famous character Mr. Bean.

He joined the London Symphony Orchestra as they played the iconic theme tune to 'Chariots of Fire' and then appeared in a dream sequence where he cheated his way to winning a race on the beach in the movie by taking a car ride almost to the finish line.

He also typically messed up when called on to play a solo with the orchestra.