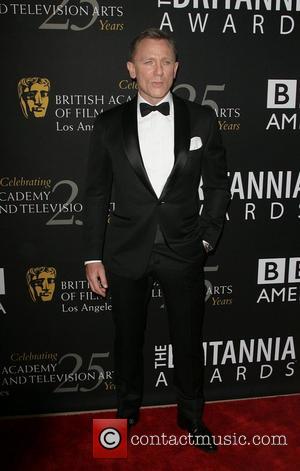 Daniel Craig and wife Rachel Weisz shared a rare moment of public intimacy at the 2012 Britannia Awards at the Beverly Hilton Hotel on Wednesday evening (November 8, 2012). The British couple were attending the BBC America sponsored event, at which Craig picked up the award for British Artist of the Year.

After being announced the winner, Craig leaned in and kissed his wife before making his way onto the stage as she applauded. The Skyfall actor mimicked his 007 persona by opting for a simple black tuxedo, while Weisz opted for a black ensemble. After picking up his gong, Craig was congratulated by director Stephen Spielberg and Oscar winner Daniel Day-Lewis, who also took home an award for his turn in Lincoln. The evening turned out to be a very Bond affair, with actresses Berenice Marlohe and Naomie Harris both in attendance, as well as director Sam Mendes. Goldeneye actor Alan Cumming hosted the event in a striking looking red suit.

Though amongst the world's most famous movie stars, Craig and Weisz have managed to keep their relationship largely private. She broke off her engagement to director Darren Aronofsky in 2010 before marrying Craig in June 2011.