Daniel Day Lewis Gets Into Character As Abe Lincoln 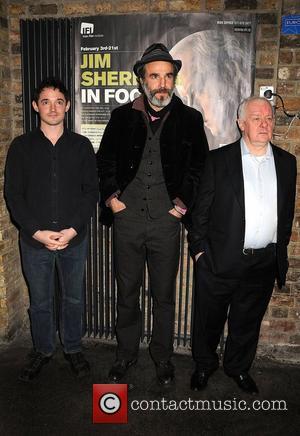 Picture: Hugh O'Connor, Daniel Day-Lewis, and director Jim Sheridan at a screening: 'My Left Foot' at the start of the Jim Sheridan In Focus Season at...

Fans have finally got their first look at Daniel Day Lewis as legendary American President Abraham Lincoln, with one intrepid college student snapping the actor while he sipped tea at a local restaurant in Richmond, Virginia.
The acclaimed character actor stars as the 16th President of the United States in Steven Spielberg's forthcoming biopic Lincoln, but paparazzi snaps of the shoot have been scarce because almost all filming has been completed indoors. However, according to Cinema Blend, Daniel was spotted quietly eating his lunch at a restaurant and was sneakily snapped by student going by the name of UvaMichael on Twitter. One of the finest method actors in the world, Lewis has been known to stay fully in character for months before a role and he looks uncanny as the former President, despite wearing jeans and a turtle-neck sweater. The movie features an all-star cast including Sally Field, Joseph Gordon-Levitt, Tommy Lee Jones, James Spader and Hal Holbrook and will follow the final four months of Lincoln's life leading up to his assassination at the hands of John Wilkes Booth. Some commentators are claiming the image makes it a forgone conclusion that Day-Lewis will scoop an Oscar nomination, but only time will tell whether he'll be honored by the Academy again. The 54-year-old first won the Oscar for Best Actor in 1990, playing a sufferer of cerebral palsy in 'My Left Food'. He scooped the same award in 2008 for his role in There Will Be Blood.
Spielberg's hugely anticipated Lincoln biopic is slated to hit cinemas in December 2012.