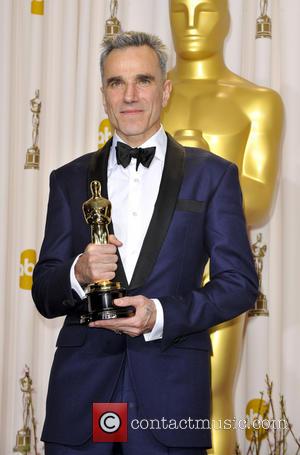 After Daniel Day-Lewis picked up his third Oscar for Best Actor on Sunday (February 24, 2013) hundreds of articles on the 'Lincoln' star dubbed him the world's greatest actor. The 55-year-old is clearly amongst the most gifted performers on the planet, though Day-Lewis himself batted away such suggestions at the Vanity Fair party following the Academy Awards.

"It's daft isn't it?" the actor told The Daily Telegraph, "Sean (Penn) had to go through all this a few years ago. It changes all the time." Most critics cite either Day-Lewis or Penn as the world's greatest living actor, though such opinions appear to lie firmly with Oscar nominations and wins. So rare are the British star's movie appearances that it seems folly to suggest nobody on the planet is doing better work. Asked where the future will take him, the actor admitted he has "no plans" to make another movie at the moment. "I can't think of anyone [characters] right now because I need to lie down for a couple of years. It's really hard to imagine doing anything after this." The difficulty in reaching him suggests it may remain that way for some time. "The thing is I forgot my phone tonight, and I'm sure my mates in the UK will have been phoning," he added.

Day-Lewis' previously won Best Actor for My Left Foot in 1990 and There Will Be Blood in 2008. His win for Steven Spielberg's Lincoln sees him supersede Marlon Brando, Gary Cooper, Spencer Tracy, Frederic March, Jack Nicholson, Dustin Hoffman, Tom Hanks and Sean Penn. The latter two actors are likely to feature at Oscars ceremonies in the future, while Nicholson and Hoffman are by no means beyond winning again. Daniel Day-Lewis At The Premiere Of His Previous Oscar Winning Movie, There Will Be Blood