Danny And The Champions Of The World - Hearts & Arrows Album Review

For a third album when most bands would be settling into their style, Danny & The Champions of The World have decided to defy this. Fans will not be able to escape noticing a definite shift for the London band. To American soft rock. 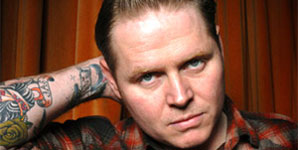 Said to be a more emotive and heartfelt offering from the band, Hearts and Arrows addresses Danny Wilson's more sensitive side - In that 90's Bryan Adams way! Highlights include 'Soul In The City' and 'Ghosts In The Wire', picking up the pace of the album and offering more confident guitar work. The slower more sensitive tracks such as 'Too Tough To Cry' really do show their musical weakness when put next to the stronger catchy creations.

There's nothing groundbreaking here, it is American soft rock. If that's what you like then that's what you'll get. Think Springsteen mixed with early Sting/The Police and you get the idea. Think predictable melodies and average lyrics. Perhaps sometimes Hearts and Arrows is so easy listening that it comes worryingly close to insignificant.

Danny And The Champions Of The World - Hearts & Arrows