Actor Darren Criss Has Apologised To Transgender Reality Tv Star Caitlyn Jenner After Making A Joke About Her Transition From Male To Female During A Hedwig And The Angry Inch Show. 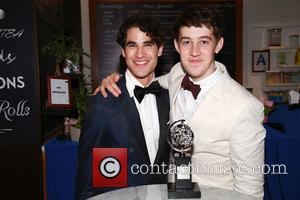 The former Olympic athlete confirmed her transition during a U.S. TV interview in April (15), and earlier this month (Jun15), she moved on from her life as Bruce Jenner by appearing as Caitlyn on the cover of Vanity Fair magazine.

The Glee star is currently portraying the gender-bending German rocker on Broadway and during a show on Tuesday (23Jun15), he added a line about Jenner.

He reportedly said, "Man, woman, moman, wan, Bruce Jenner, whatever you are."

Criss was subsequently reprimanded by an audience member on Twitter, who wrote: "Tonight, Darren Criss, as HEDWIG said, "man, woman, moman, wan, Bruce Jenner, whatever you are" and it was very distasteful."

The 28 year old is now apologising for his comments in a message on Facebook reading, "I want to sincerely apologize to Caitlyn Jenner, all transgender people, and anyone who was offended for my words on stage during Tuesday evening's performance.

"In no way do the remarks reflect my personal belief system or my support for transgender people. However, I do realize the severity of the comment and the weight that words can carry and for that, I take full responsibility. I commend Caitlyn on her strength and for spreading acceptance around the globe. I have been and remain a proud and unwavering ally of the LGBTQIA (lesbian, gay, bisexual, transgender, questioning, intersex and asexual) community, and will continue to walk alongside my friends on the road to full equality and acceptance."