Wrestler-turned-actor Dave Bautista Hates All The Secrecy Surrounding Spectre Because He Doesn't Like "Dancing Around Answers". 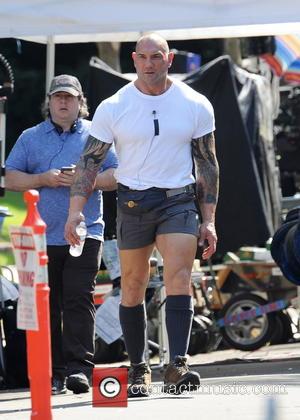 Picture: Dave Bautista - Actress Melissa McCarthy wears a neck brace for a scene in her new movie "The Boss" with co star Kristen Bell and...

The star joins the latest installment of the James Bond franchise as Mr. Hinx opposite Daniel Craig's 007, but exact details of his role are still shrouded in mystery. Fans will finally find out when the film hits cinemas in the U.K. from 26 October, but it's Dave who'll feel the greatest relief.

"No, it's not!" he laughed to Collider when asked if keeping all these secrets is fun. "I don't like dancing around answers. It's because I'm so excited, I wanna talk about this bad**s and memorable character. But these days, when you say one thing it just spreads across the internet and (the fans) aren't as excited when they go and see it."

Since switching from the ring to the big screen Dave has appeared in features including Guardians of the Galaxy and House of the Rising Sun, but Spectre is probably his biggest role to date and he's glad director Sam Mendes took a chance on him.

"I did the audition, it was a bit of a process, but finally I got a call: 'Sam would like to meet you, they really want you for the role but they wanna know how you get along, if you can co-exist,'" he recalled.

"I think it's one of those things, where until they meet me, they don't know what to expect, because of my appearance and my background, and people think I'm (grunts) that I'm gonna be that guy but you know, I'm just not that guy."

Luckily Sam and Dave got on well and talked at length, but surprisingly, 007 wasn't a big topic of conversation.

"We went over and we didn't talk a whole lot about the role, it was just a meet and greet with him," he explained. "I had done some research on Sam - I was familiar with his career but not with him as a person, so I watched a Charlie Rose interview and they talked a lot about cabaret, so that was one of the things we started talking about, cabaret, more than actually the Bond. Before I left he said: 'Do you have any questions?' and I said: 'I have two.' I said: 'Is Mr. Hinx a bad**s?' and he said: 'Oh yeah, he's a bad**s.' And I said: 'Is Mr. Hinx intelligent?' and he said: 'Very.' And I said: 'Man, I really want this role, so we're clear.'"

Dave Bautista wants to move behind the camera and direct