Rocker Dave Grohl Is Regaining The Strength In His Broken Leg With A Rigorous Physiotherapy Routine, By Drumming Along To Led Zeppelin Tracks Three Times A Day. 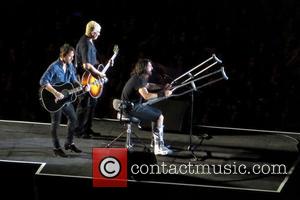 The Foo Fighters frontman injured his right leg after falling off stage during a concert in Gothenburg, Sweden, last month (Jun15), and the band was forced to axe a prestigious headline set at Britain's Glastonbury festival as a result of the incident.

They returned to the stage in Washington, D.C. earlier this month (Jul15) with Grohl performing from an enormous throne with his limb propped up and in a cast, and now he has revealed his unusual method of recovery as the injury heals.

The former Nirvana drummer tells Q magazine, "Leg is doing fine, thanks. It's a slow process, but every day it seems to feel a bit better. It's funny, ever since I started playing the drums my right calf muscle has been twice the size of my left from stomping the hell out of my kick drum pedal. Now it looks like a sad little chicken wing so I've been doing a little bit of my own rehab therapy lately, which is air drumming along to Led Zeppelin three times a day. Sports doctors, take note."