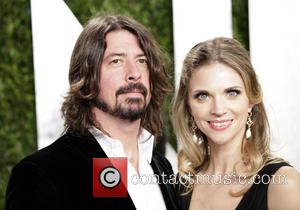 Rocker Dave Grohl endured a bizarre night out in London recently when faded pop star Lee Ryan tagged along and allegedly disrupted the party with his drunken antics.

The Foo Fighters frontman was in the U.K. last month (Feb13) to promote his Sound City documentary and perform with his supergroup the Sound City Players.

After the gig, Grohl threw a bash at famous London rock pub The Crobar, and he has now revealed the night was spoilt by a drunken reveller, who he later found out was Blue star Ryan.

He tells NME magazine, "There was this English singer who was with us who was completely wasted. We almost had to throw him out... Have you heard of this band Blue? The guy kept telling us how many million records he's sold... I was like 'Really? You?'"

Ryan alluded to the incident in a post on his Twitter.com page on the day of the Sound City Players gig at London's Kentish Town Forum. He wrote, "Oh my God!!! I'm at the Sound City gig!!!! Dave Grohl is playing!!!! (I am) meeting him after!!! Best in me!!! Amazing!!!!!"