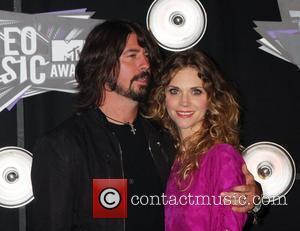 Foo Fighters rocker Dave Grohl is upset with the producers of Michael Jackson's posthumous album for incorrectly crediting him as a contributor.
The drummer admits he did hit the studio with Lenny Kravitz for the Jackson track (I Can't Make It) Another Day - but his beats weren't used.
He says, "That was messed up actually. Lenny Kravitz, who I only met once, called and asked if I want to play drums on a track. I said, 'Sure', played drums on it and I never heard from them again.
"On the sleeve notes it says, 'Michael Jackson featuring Lenny Kravtiz and Dave Grohl' but they didn’t use any of my recordings. That’s not cool."