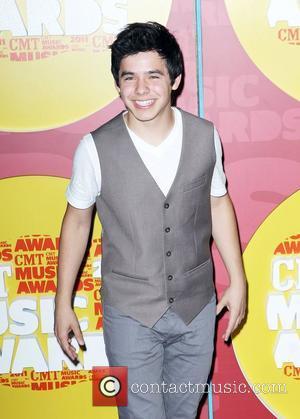 Mormon pop star David Archuleta has paused his music career to begin his missionary service in South America, telling fans, "I will see you all in two years."
The American Idol star is stepping out of the spotlight to carry out his religious duties as a member of the Church of Jesus Christ of Latter-Day Saints.
In a farewell YouTube.com video posted on Wednesday (28Mar12), Archuleta admits he has faced "quite the task" packing his bags for his two-year journey away from home.
He says, "It's been a very emotional last week. I was able to have a lot of family and a lot of friends come. I gave my farewell, last talk this Sunday to my neighbours, my friends and my family... (Being a missionary) is a decision everyone knows about but it's a very personal thing and I wanted to keep it that way...
"I've been trying my best to get ready and prepare, been packing up - but there's a lot of stuff you need (because) you're moving away for two years. It's quite the task! It's going to be crazy, I'm going to South America and I'm excited to be a part of Latin culture."
Archuleta admits the career hiatus a "big sacrifice" but insists serving the community is an important part of his faith.
He adds, "I'm going to be trying my best to focus on the people over there... It's going to be a big sacrifice but I'm doing this to be able to have more of that one-on-one time with my Holy Father, with God. It's time for me to work on my relationship with Him."
He closed the video by announcing, "I will see you all in two years. God bless and take care."