David Arquette had a Bar Mitzvah in Israel earlier today (11.07.12), 28 years later than most boys undergo the right of passage act. 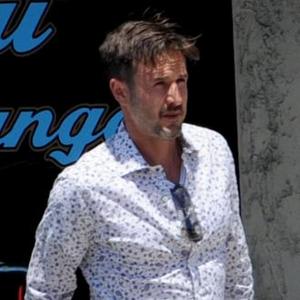 The 41-year-old actor underwent the Jewish right of passage ritual, 28 years later than it is performed by most teenage boys.

The 'Scream 4' star - who's mother, Brenda Olivia, is Jewish - was in the country to film travel show 'Mile High' and was watching a boy go through his Bar Mitzvah, when it was suggested he to should undergo the same and get in touch with his Roots.

Enthused by the idea, David took a kippah and tefillin, Jewish prayer robes, and went to the Western Wall.

David was required to read a first portion of holy text the Torah and had phylacteries - small leather Boxes containing verses from the Torah - placed on his head while he held his arm in front of the Western Wall during the ceremony.

Shmuel Rabinowitz, the rabbi who conducted the ceremony, told Vosizneias.com: ''He was very emotional, saying he was happy to be part of The Chain of the Jewish people.

''I'm very pleased to see a man who is returning to his roots.''

David later posted on twitter: ''I had my bar mitzvah today at the wall. Finally I'm a man.''

David - who split from 'Friends' actress Courteney Cox in 2010 - was not brought up in any one religion, and while his own mother did not practice judaism, his maternal grandmother was a Jewish refugee of the Nazi Holocaust of World War II. His father, Lewis Arquette, converted to Islam.