David Beckham and his son, Brooklyn, were involved in a minor car accident outside his Beverly Hills home. 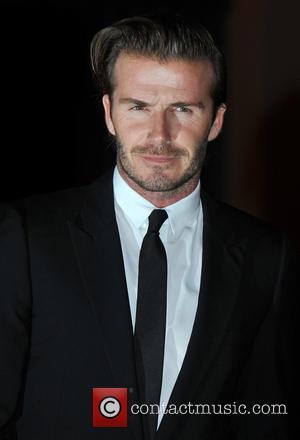 David Beckham was involved in a minor car crash outside his LA Home on Saturday afternoon (Oct 26th).

The 38 year-old crashed into a female driver as soon as he pulled out of his Beverly Hills driveway.

According to X17 Online, the soccer star collided with another SUV but thankfully there were no injuries to report.

"I heard this loud sound and it was obviously a crash. It sounded really serious so we drove up the road to see what happened and realized it was Beckham. The front fender was dragging on the ground, making a scraping noise on the pavement. It was pretty bad."

The photographs reveal Beckham's black Range Rover hit a white Acura SUV, which had a rather large dint on the front right side of the bonnet.

The Range Rover's entire front fender was ripped off and was left dragging along the pavement.

The former Manchester United player was returning from the gym with his wife, Victoria Beckham, and the rest of their clan. After dropping them off, David set out again with his eldest son Brooklyn (14), and got into the accident.

The crash appears to be David's fault but nobody was hurt and the police were called out to file a report on the crash.

This is the second time David and his son have been caught up in a car crash, the first time been in 2011 where they were in the midst of a multi-vehicle pile-up in Los Angeles, but they both escaped uninjured. The crash could have been David's fault David's eldest son. Brooklyn, was also in the car when it crashed