David Beckham is glad he and wife Victoria at children at a young age because they have been able to enjoy all the success he has tasted during his soccer career. 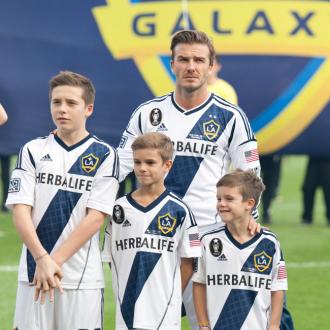 David Beckham is glad he had children at a young age.

The 38-year-old star is pleased he and wife Victoria - who have kids Brooklyn, 14, Romeo, 12, Cruz, nine, and two-year-old Harper - didn't wait around to have children because they have been able to share in his success at soccer clubs Manchester United and Real Madrid over the years.

David - who has won 19 major trophies in four countries throughout his career - said: ''I wanted to have children and boys that could live my career with me - and they did.

''The good thing about having my children at such a young age is they lived through my career with me and that's one of the things I always wanted in life.

''The reason I work so hard and I want to achieve so much is for my children.''

The retired soccer player has had an illustrious career on an off the pitch since starring in the United youth team in 1992, but he still finds it ''embarrassing'' to talk about an initiation ceremony he had to do during his early career in which he had to perform a sex act while looking at a picture of United legend Clayton Blackmore.

He added to Metro newspaper: ''Everyone had an initiation that you had to go through on the youth team, that was one of the most uncomfortable ones!

''It was embarrassing to talk about!''

David was so disgusted by his and other ''degrading'' initiation ceremonies that went on at the club he managed to put a stop to them when he was a senior player, and he is still ''very proud'' of ending the humiliating acts.

He told The Sun newspaper: ''There were a lot of initiations which went on through our youth team and reserve team era. We kind of put a stop to it, which we are very proud of.

''They were embarrassing, it was degrading. But it was part of growing up at that point.''