David Beckham: 'I'm Out Of Retirement!'

David Beckham Has Announced He Is Returning To The Soccer Field For A Charity Match. 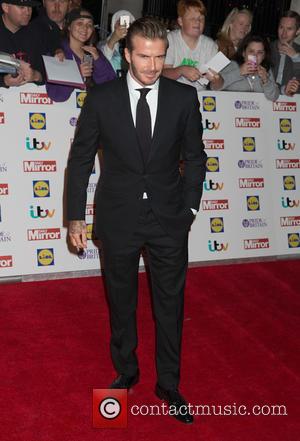 The legendary athlete retired from the sport in 2013 after a glittering career which lasted 20 years and led to 19 big trophy wins.

Although he had no plans to show off his ball skills again, David has been tempted out of retirement for a very special cause.

"(I gave up soccer) three years ago and I never thought I'd be getting my boots out again but everyone knows that I'm ambassador of UNICEF so we've come together and we've decided to raise funds by doing a game," he confirmed on BBC Radio 1 on Friday (02Oct15).

"I'll be bringing my boots back out and playing on November 14 (15) at (soccer stadium) Old Trafford, which again, I'm excited about. I'll be the captain of the Great Britain team and (Zinedine) Zidane will be captain of the Rest of the World. Carlo Ancelotti is the (manager) of that team as well and I can't believe it, but Sir Alex Ferguson is the (manager) of my team."

The game means an extra special amount to David, as Old Trafford is the home of the team where he started his career, Manchester United. Alex Ferguson was his manager there and he agreed to be involved in the upcoming game after David personally invited him.

"I did actually call him and ask him about this one," David explained. "I don't normally. I saw him the other day for the first time for a long time and when we were at Manchester United we'd never even think about having a glass of wine in front of him or a beer... I'm 40 years old now and he walked into the room, someone handed me a glass of wine, and I stood there talking to him for 20 minutes with a glass of wine hidden behind my back. He's like a father figure for me and he gave me the chance to play for Manchester United, he's kind of God."

Things haven't always been so cosy between the pair though. Alex famously kicked a soccer boot which hit David on the head during their time working together, with the athlete joking they might try to recreate the moment in November.

"The only time I've kicked a ball throughout this time is with the kids and the only game I've played since I've retired was one for the dads and teachers at school. (This one) might be a bit tougher," the star added.