David Beckham left the next President of China temporarily without security when his bodyguards became star struck. 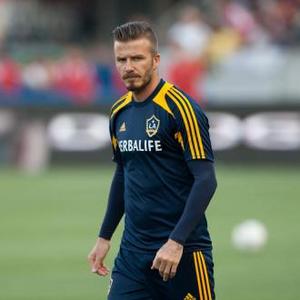 David Beckham left the next President of China temporarily without security when his bodyguards became star struck.

The soccer star's fame was allegedly so influential that the soon-to-be Chinese president Xi Jinping's safety team lost focus when he walked into the room at a high-powered meeting.

The chief executive at his football team La Galaxy, Tim Leiweke, told ESPN: ''David is phenomenal. We had a meeting with the soon-to-be president of China.

''He came into a suite with his security guys. These guys don't mess around, they pull guns if someone gets close to him.

Tim added: ''But David Beckham comes walking into the suite and the security guards leave the president, pull their autograph pads out and there is the president, in the middle of the chaos, all on his own because his security are all in line getting pictures with David.''

David's star status was not enough however, to win him a place on the Great Britain soccer team at the 2012 London Olympics.

He said: ''Ryan obviously has had such an amazing career with Manchester United and also with the Welsh team and he deserves to be there.

''He deserves to play in a big competition like this. It would have been great to have been there with him because we have a lot of great memories from playing for Manchester United. I hope he gets a gold medal.''