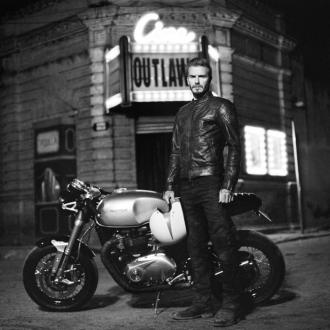 David Beckham has shot a short film for Belstaff.

The 40-year-old hunk donned biker leathers for the film, titled 'Outlaws', in which he plays a motorcycle stuntman haunted by a beautiful trapeze artist and said making the mini-movie was an ''adventure'' he'll always remember.

He said: ''I always love to challenge myself. Filming 'Outlaws' in the Mexican desert with Belstaff and the Legs team, not to mention working alongside Harvey, Cathy, and Katherine, was an adventure I will never forget.''

Meanwhile David - who divides his time between London and Los Angeles with wife Victoria, 41 and kids Brooklyn, 16, Romeo, 12, Cruz, 10 and Harper, four - appears to have caught the biker-bug and was spotted riding around Los Angeles on a new set of hot wheels.

The handsome ex-footballer said he enjoys the anonymity of being on the road.

He revealed: ''When you're out there, no one knows that it's you. You have a full-face helmet on, so you enjoy just being alone.''