David Beckham is keen to make a career change and become an actor, but doesn't want to rush into anything that is ''too big for me''. 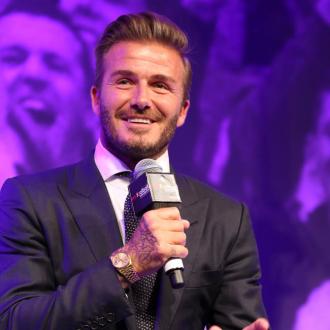 David Beckham is gunning to be an actor.

The football icon turned his hand at acting with a cameo in short 'Outlaws' and next year he has a part in pal Guy Ritchie's film 'Knights of the Roundtable' and fans have even taken to social media urging David to be the next 007.

One follower tweeted: ''People talking about Idris Elba. But for me, David Beckham is the perfect role to be a James Bond 007. And he is British (sic).''

While another wrote: ''Wouldn't it be awesome if David Beckham be the next James Bond (sic).''

However, the 40-year-old hunk doesn't want to be one of those sports stars who rushes into a career in the movies and fails, but said he has ''loved'' the small roles he has had so far.

He told The Times newspaper: ''I am very aware that many sportsmen and other celebrities have turned their hand to acting and failed. But what I have done so far I have loved.''

The former Manchester United and Real Madrid footballer is sure he is doing well so far as a film star because Madonna's ex-husband wouldn't cast him if he ''thought I was going to ruin it'', but also admitted he'd ''love to do more'' despite not wanting to dive into roles which are ''too big for me''.

He added: ''[Guy] wouldn't put me in a film if he thought I was going to ruin it.I had 13 lines and practised a huge amount.

''I would love to do more, but I can't just jump into roles that are too big for me. I want to build up my experience and see where it takes me.''