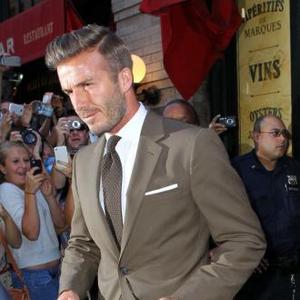 David Beckham reportedly wants to buy the Aston Martin car used by Daniel Craig in the film 'Quantum Of Solace'.

The soccer star is apparently ready to part with £100,000 at auction to get the vehicle which character James Bond drives.

A source told the Daily Star newspaper: ''Becks is a huge Bond fan and has always wanted to own something classy from the films.

''So when he heard the auction was taking place, he was desperate to bag the car for himself.''

However fellow footballer Cristiano Ronaldo is also after the motor and is bidding too.

The insider added: ''However, Ronaldo also has his eye on it, which might prove to be competition for Becks if they start a bidding war.''

The two-door V12 DBS coupe will be the top attraction at Christie's charity auction on October 5.

Experts predict the car, one of seven used for the motion picture, could rake in more than £100,000 at the invitation-only event.

The money raised will go towards the children's charity Barnardo's.

David already has an extensive collection of cars which include Cadillacs, Porsches, Range Rovers, Bentleys and a Hummer.