David Beckham has never let his four-year-old daughter Harper have her hair cut because he wants her to grow it really long. 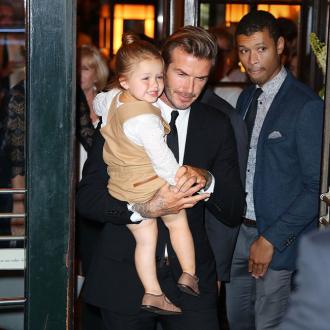 David Beckham's daughter has never had her hair cut.

The retired soccer star has revealed he won't let four-year-old Harper get her tresses trimmed and he even banned his wife Victoria from taking her to a stylist a year ago because he wants the little one to grow her locks really long.

He added: ''Since she was born, we haven't cut it. That's why it's pretty much down to her knees.''

However, the 40-year-old hunk - whose mother was a hairdresser - will sometimes hack at his sons Brooklyn, 16, Romeo, 13, and 10-year-old Cruz' hair from time-to-time.

Asked if his mum taught him how to cut hair, he said: ''No, she didn't! I wish she did. I do cut my sons' hair from time-to-time. When they have a buzz cut, I do it.

''If I have to use scissors, the boys know not to ask--she never taught me how to do that.''