Before The Thin White Duke, Aladdin Sane or even Ziggy Stardust, David Bowie began to blossom on 'Hunky Dory'

Barely a year after he'd released The Man Who Sold The World, and only six months before he would release his seminal album - The Rise And Fall Of Ziggy Stardust And The Spiders From Mars, David Bowie delivered his fourth full length studio album - Hunky Dory. Released on December 17th, 1971, Hunky Dory is somewhat of a transitional album. After lots of experimentation, different bands, different looks and a whole host of sounds Bowie began to find that extra level of self confidence and self belief that would drive him through an incredibly creative and fertile decade. 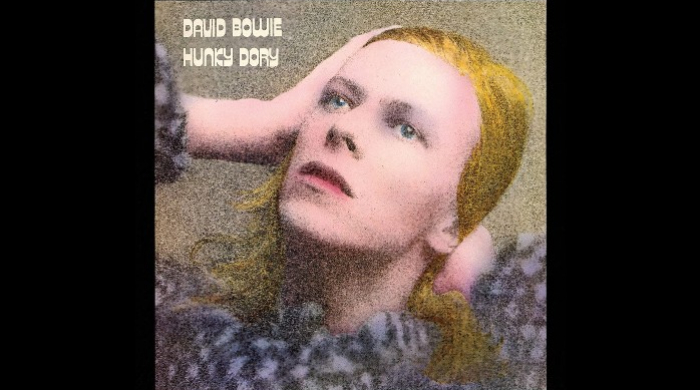 Hunky Dory may not be the very best of Bowie's 70's albums but it is largely considered to be where the journey started. After dabbling in Blues and Rock on The Man Who Sold The World, Bowie settled on more of a signature sound throughout the 11 tracks of Hunky Dory. Both this record, and the ones that followed, used the same definitive band line-up and the same producer. Bowie once again hooked up with his 'wingman' Mick Ronson as well as drummer Mick 'Woody' Woodmansey and bassist Trevor Bolder to produce an inspired album that brilliantly signposts the future for Bowie.

The 11 tracks that make up Hunky Dory see Bowie embrace a more art-pop bent as he deals with subjects that cover mental health, philosophy and parenthood, among other things. Bowie's use of many pop-culture references in his songs were undoubtedly ahead of their time and his choice to include three songs written in tribute to Andy Warhol, Bob Dylan and Lou Reed signal where he was drawing his inspiration and influence from.

Queen Bitch is by far the most animated of the three "tribute" songs with Bowie managing to capture an essence of the man (Lou Reed) through both the conversational lyrics and the inspired instrumental soundtrack. Of the tracks that make up Hunky Dory this is probably the one that best embodies Bowie's transformation from his work on The Man Who Sold The World to his re-invention as Ziggy Stardust only months later. This is surely one of Glam-Rock's pioneering songs, and one of the few on the album that is not piano led. It serves as a vibrant manifestation of The Velvet Underground's influence on popular culture at the time.

Whilst Bowie used some of the cultural touchstones of the day to litter his lyrics he also referenced his brother's struggle with mental health on the close out track - The Bewlay Brothers, and just as candidly and touchingly, marked the birth of his son, Duncan Zowie Haywood Jones, with a quite brilliant "acoustic oddity" in Kooks. Kooks is an under-rated feel good masterpiece. It's heartfelt, genuine and very original; incorporating Bowie's unique turn of phrase as well as some beautiful hooks and melodies. The incidental use of a brass section to compliment the piano and playful beat are delightful.

In 1971, the "thinking man's Marc Bolan", was clearly bursting with ideas and finding inspiration from nearly everything around him. The sheer amount of songs that Bowie had under construction at the start of the 70's is quite incredible, with many of his Ziggy tracks already taking shape as he recorded Hunky Dory. With only six months between the two records it was as if he couldn't get everything out quite quickly enough.

As well as referencing his family life, and musing on Friedrich Nietzsche, Bowie was quite evidently also looking forward. The opening track - Changes couldn't have encapsulated Bowie's state of mind better if it tried. As well as introducing the album as a largely piano led set of compositions, Changes also flags up Bowie's more melodic and commercial flare. Changes is an immediate, unapologetic pop song with a sing-a-long chorus and killer hook. The song is so joyful and embracing with a forward looking positivity. "I can't waste time" Bowie sings as the arrangement takes us up and down with gentle retrospective reflection as if casting off the shackles of the past and venturing forward towards a new horizon of his own making. Add in the fantastic balance of the vaudevillian piano passages and smoking horns and you have one sublime pop song.

Oh! You Pretty Things continues on the piano led theme with a song that starts as a classic ballad and then morphs into something of a glorious show tune with an irresistible chorus delivered over a thumping beat. Who'd have thought Friedrich Nietzsche's thoughts would lend themselves to a perfect slice of leftfield pop?

Hunky Dory's standout moment however comes courtesy of a glorious piano ballad like no other. With significant keyboard contributions from Rick Wakeman, Life On Mars? is just a masterpiece which ever way you slice it. With it's epic string arrangement and some terrific guitar solos - both credited to Mark Ronson, as well as a plethora of unforgettable one liners, Life On Mars? is like a one song Rock-Opera. The cinematic percussion, the continual rise and fall of the soundtrack as it builds and breaks, and the ground breaking lyrics make this a classic early Bowie track.

Hunky Dory may have only been discovered by many because of the success of Ziggy Stardust but it remains a significant album for David Bowie as he blossoms into a creative tour-de-force. Hunky Dory helped Bowie hone his incredible song-writing skills and saw him elevate is performance level, making a conscious, seismic shift that would see him realise his superstar status only months later.