David Bowie's Ziggy Stardust has been officially unveiled as one of London's greatest fictional characters. 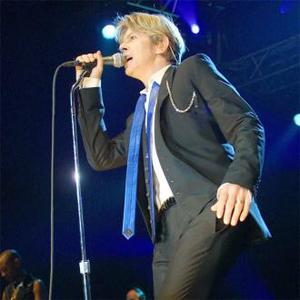 David Bowie's Ziggy Stardust has been honoured as one of London's greatest fictional characters.

A black plaque was unveiled in the English capital's Heddon Street today (27.03.12), the location where David was first photographed as Alter Ego Ziggy, for the cover of his album 'The Rise and Fall of Ziggy Stardust and the Spiders from Mars.'

The shot was taken in 1972 by photographer Brian Ward, and shows David with bright red hair, wearing a jumpsuit and platform boots, with his foot resting on a step and a guitar slung over his shoulder.

The plaque was unveiled by Spandau Ballet star Gary Kemp, who said: ''The stardust generation has come of age, he was the ultimate messianic rock star.

''With him Bowie successfully blurred The Lines between not just boys and girls, but between himself and his creation.

''It was a conceptual art piece he was trying to sell through popular culture - and it worked.''

Ziggy Stardust is the most widely known of David's characters, and his life and demise are charted on the album.

David also created a number of other characters in his career, including Major Tom, the Thin White Duke and Aladdin Sane. He was not present at the unveiling of the plaque and has, in recent years, taken a step away from the spotlight.

The plaque is only the second to be erected for a fictional character in London, the other being for Sherlock Holmes on the city's Baker Street.