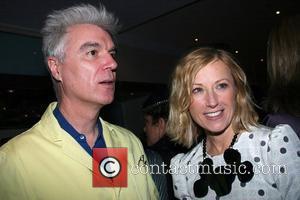 David Byrne and Brian Eno have collaborated on their first album for 27 years, entitled EVERYTHING THAT HAPPENS TODAY.

The legendary TALKING HEADS frontman and renowned producer Eno have not worked together since 1981's LIFE IN THE BUSH OF GHOSTS.

Strange Overtones  the first track taken from the record  will be available as a free download from August 4th, while the entire album is scheduled for release on August 18th.

Byrne explained that they were brought back together after their first album was recently reissued.

"I recall Brian mentioning that he had a lot of largely instrumental tracks he'd accumulated, and since, in his words, he 'hates writing words', I suggested I have a go at writing some words and tunes over a few of them, and we see what happens," he said.

The pair are set to tour together from this Autumn, with Byrne saying that the gigs will be an attempt to link the new material "with what we did 30 years ago".