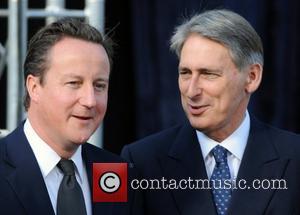 Picture: Prime Minister David Cameron and the new Secretary of State for Defence Philip Hammond attend a ceremony to celebrate the town of Wootton Bassett gaining...

The international furor over Jay Leno's use of a photo of a Hindu shrine in India for a gag about Mitt Romney's wealth last week shows little sign of abating. On Thursday it reached the British parliament, with Labor Party MPs Virendra Sharma and John McDonnell introducing a motion asking the government to express "concern and regret" over Leno's "depiction of the Golden Temple as a home of the rich." Such a depiction, the motion said, "shows a complete misunderstanding of the Sikh faith and is derogatory to Sikhs across the world." The motion further proposes that the government of Prime Minister David Cameron "make representations to the U.S. government that while recognizing principles of freedom of speech there should be more understanding and respect shown to the Sikh faith." Leno has yet to comment on the brouhaha that his joke touched off, including a lawsuit filed against him in California by the leader of a Sikh organization and a complaint filed by the Indian Foreign Office with the State Department.