Cassidy Sues Over Profits From The Partridge Family Merchandise 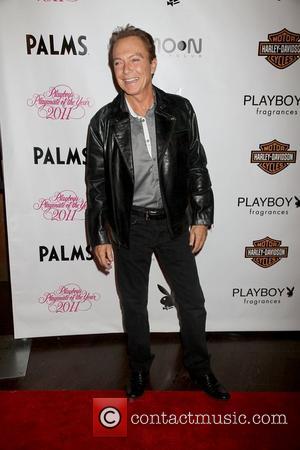 Picture: David Cassidy Playboy's Playmate of the Year 2011 at Moon Nightclub at The Palms Hotel and Casino Las Vegas, Nevada - 06.05.11

Former teen idol David Cassidy is taking his battle for merchandising compensation from his days on 1970s show The Partridge Family to court.
The singer/actor shot to fame as Keith Partridge on the popular ABC sitcom in 1971, before embarking on a pop career.
Network bosses continually used his image to sell products branded with the hit series, but Cassidy only realised earlier this year (11) that Abc executives had raked in approximately $500 million (£312.5 million) from the merchandise - and he has been seeking a share of the profits ever since.
On Wednesday (05Oct11), Cassidy filed suit against Sony Pictures Entertainment bosses, who own the rights to the show, accusing them of fraud and breach of contract.
The legal papers, lodged in Los Angeles Superior Court, read: "For nearly 40 years, defendants have swindled Mr. Cassidy out of his rightful share of the profits from The Partridge Family, and when Mr. Cassidy has inquired as to the matter, have lied to him so as to continue to conceal their deception."
His legal team go on to state: "Mr. Cassidy has reason to believe, and does reasonably believe, that defendants have been perpetrating a scam."
Cassidy, 61, is demanding "in excess of millions of dollars" and he claims he has so far only received an estimated $5,000 (£3,125) from The Partridge Family merchandise.
He tells CNN, "It's just a matter of being fair, and doing the right thing. I have no other alternative if Sony is not going to be reasonable."
Under the terms of his original TV contract, Cassidy is reportedly entitled to 15 per cent of net merchandising revenues for the use of his likeness and a cut of profits from other items related to the show.