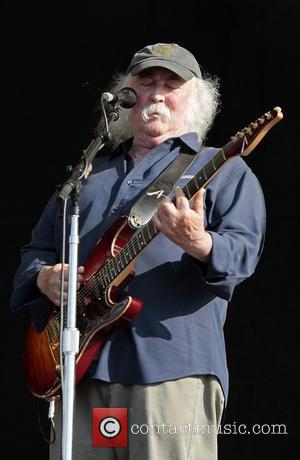 Folk-rock icons David Crosby and Graham Nash entertained demonstrators in New York on Tuesday (08Nov11) as Occupy Wall Street protesters prepare to enter a third month of the anti-corporate greed movement.
The longtime bandmates took to Zuccotti Park in Manhattan armed only with guitars and their singing voices to perform a five-song acoustic set.
British-born Nash joked, "I don't think we have performed without microphones for a long time."
The duo was forced to keep their performance simple as amplified sound is prohibited in the park.
Upon arriving at Occupy Wall Street's 'tent city,' Crosby and Nash climbed atop an embankment to perform songs like Long Time Gone and Teach Your Children.
After the unannounced concert, Crosby told RollingStone.com he and Nash were inspired to visit the protesters after coming across Occupy demonstrations all across Europe on a recent tour.
He said, "Everybody is realising that they're getting s**ewed. People are recognising the basic truth that the system is loaded against them, and they're looking for equality. It's a simple thing."
Nash added, "It's the people waking up. That's what we do as musicians. We want to wake people up. I don't want to talk to sheep - I want people that are alive and thinking and trying to do something positively to change their situation. That's what we've always been about."
And he feels sure the Occupy movement will get bigger internationally: "Something's happening here."
The protesters are campaigning against social and economic inequality, corporate greed and corruption.
Rage Against The MAChine star Tom Morello and British musician and activist Billy Bragg are teaming up to perform at an Occupy rally in London on Wednesday (09Nov11).