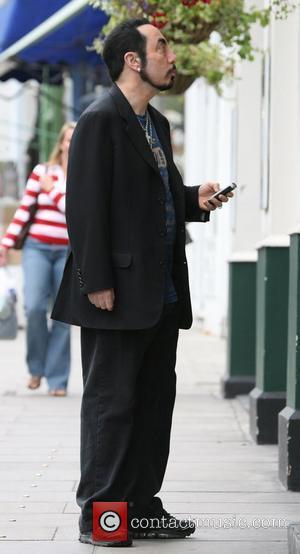 Picture: David Gest plays it up for the cameras as he goes for a coffee in Primrose Hill London, England - 17.09.07

David Gest is set to sue a Los Angeles auction house - after bosses held a sale of Michael Jackson memorabilia the day after his death.
Julien's Auctions offered up 21 Jackson family items in Las Vegas on Friday (26Jun09), telling clients they were from Gest's personal collection.
But Gest, a close friend of the tragic superstar, has denied all knowledge of the event - and has instructed his lawyers to launch a lawsuit against the auction house.
He tells Britain's The Sun newspaper, "I never consigned any of these items to Julien's Auction House in L.A. I have instructed my legal representatives Sheridans solicitors to sue the auction house and let buyers know this was not my auction.
"I think it is terrible that the auction house would carry out a sale of items belonging to a man who had not been buried yet. Even if I once owned any of these items this should not have been misleadingly portrayed as my personal auction to the press and buyers. I received no money from this sale."
A spokesman for Julien's Auctions tells the tabloid, "The items were consigned to us by a third party who got them from David Gest at some time in the past. This is an auction that we had planned back from the spring. When we heard Michael had passed away we did toy with the idea of pulling the 21 items but this was an important part of history and we decided to go on."
The sale proved the value of Jackson-related mementos is set to rocket - the letters, signed albums, and paintings took nearly $1 million (£666,6000) in the auction at Planet Hollywood hotel and casino.
One signed Jackson 5 album was expected to fetch between $400 (£266) and $600 (£400), but sold for a staggering $33,750 (£22,500), while an image of Mickey Mouse and Pluto that Jackson painted as kid fetched $25,000 (£16,600). It was expected to go under the hammer for $1,000 (£660).
A mysterious handwritten letter Jackson wrote to a pal called Greg, but never posted, sold for $18,750 (£12,500) - $18,000 (£12,000) more than estimated.