David Hasselhoff tired to escape a parking ticket using Knight Rider car, KITT, as an excuse when he was in London over the weekend. 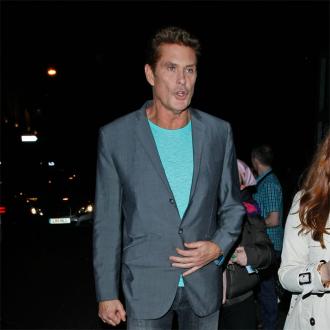 David Hasselhoff tried to escape a speeding ticket by blaming it on his 'Knight Rider' car.

The hunk, 61, - who is known for his role in the 1982 TV series as an undercover Las Vegas police detective Michael Knight who has the help of a car named KITT - resorted to telling police the vehicle drove itself and should take the blame for his being caught going to fast ahead of this year's Gumball 3000, which took place in London on Sunday (08.06.14).

David admitted he manages to escape trouble with the law by using his fame, but this was the first year he's been made to pay for his fast wheels.

He confessed: ''Police pulled me over, for speeding.

''Normally on Gumball, when I get pulled over by the police, I have a photo with them and they let me off. But not this year.

''I told them that it wasn't my fault, because KITT drives itself.''

David was at the annual British international motor rally which saw, more than half a million fans line Regent Street where the stars arrived for the London leg of the event.

He was joined by other A-Listers including Deadmau5 - real name Joel Zimmerman -who astonishingly missed the whole thing by taking a wrong turning.

The producer failed to make it onto the grid and was forced to return to his hotel red-faced.

The epic rally sees the Gumball teams roaring 3,000 miles across two continents and five countries in seven days, from Miami to Ibiza.