British Boxer David Haye Has Been Arrested In Dubai On A Fraud Charge Amid Allegations He Paid For A Property With A Cheque That Bounced. 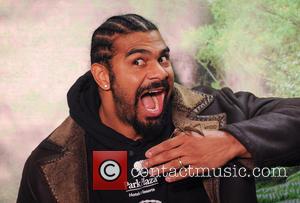 The sportsman, who once boxed troubled pop star Justin Bieber for a TV special, was detained by officials at the city's airport upon his arrival in the United Arab Emirates (UAE) earlier this month (Apr15) for a vacation.

He was quizzed by cops at a police station and later released from custody, but was ordered to hand over his passport, so the former world heavyweight champion has been stranded in the country for two weeks.

Haye, 34, has now spoken out about his ordeal, revealing the cheque was the final payment on a property he is buying in Dubai, and insisting it bounced due to an administration error.

He tells Britain's The Sun newspaper, "The cheque was presented to the bank four days before I landed. It was not due to be presented until final completion of my property, which is due in a few weeks. This was an administrative error which is being rectified. I explained to the police and presented documents as proof. But I totally understand these mistakes can happen."

Writing cheques that bounce is a criminal offence in the UAE and those convicted face jail sentences and hefty fines.