Review of Skin and Bones Album by David J. Roch

Singer/Songwriter David J. Roch releases his interesting, experimental album Skin and Bones through Dram Records. It's a debut release from him, an ambitious and different style of music that's hard to categorise and could be interpreted as a bit of a gamble, a bit of a challenge aimed at the musical stereotypes or a bit of a daring question of musical conventions. The only question is whether it works and whether it's successful. 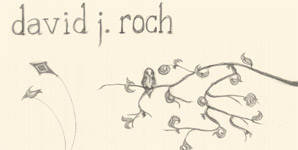 There's no doubt at all that Roch is talented. The songs he's written sound immensely complex despite the fact that they don't exactly contain many different musical parts. There's a lot of mismatched sounds and parts of instruments in each song, the only prevailing musical elements present in every song are his haunting, chilling and oddly high-pitched vocals and the guitar he's holding as he plays, the rest of the parts sound slightly like 'optional extras' in the background. This works, though, because the album is styled as David J. Roch, and so obviously the only necessary elements to the songs are what he himself plays.

Throughout the album, Roch experiments with genres; blues, folk, country and western, rock n' roll. It's all there and all spectacularly done. It keeps the listener on their toes; the album takes them to places they don't expect, when they don't expect them. It's a nice feeling to not know what to anticipate from song to song, although there is the issue that this could be wasted on the more casual listener. Skin and Bones sounds almost like it's designed to be listened to by a musician, it's full of aspects and sounds that a musician would notice, but might slip by unnoticed to a relaxed, easy listener. This is one of the only problems noticeable with the album, however. Even a casual, rather than an intent, critical listener, can find masses of enjoyment in this album.

At first listen, it's seems that the vocals themselves have taken a bit of a backseat with Roch when he has sat down to write this album. Indeed, it does sound particularly focussed on using different musical effects on the instruments, reverb especially seems popular with him, and also using different types of instruments to "let the music do the talking." There is some good use of brass on The Lost Child and also on Hell Followed, a haunting and echoing version of a snare click on Hour of Need, as well as the huge amount of epic sounding strings on Only Love. However, this initial first impression of a lack of importance on the vocals is replaced quickly very early on. In fact, this initial idea is blown clean out of the water by track four, The Devil Don't Mind, which is almost entirely made up of vocals and hardly any music in the background. So there went that theory. Instead it makes more sense to come to the conclusion that the vocals and the music complement each other extremely well.

Overall, Skin and Bones is an ambitious, experimental, extremely complex album, designed to be listened to with total intent and immersion. It sounds like it's meant to be sat and listened to properly, with respect and an open mind. It's not background music, but it is extremely clever, innovative and destined to be very successful.