David Letterman To Make Debut On 'The View' 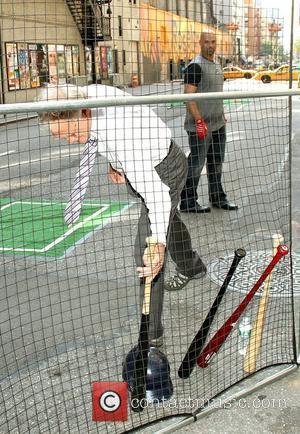 Picture: Major League Baseball player Albert Pujols and David Letterman selects a bat for a game of baseball outside the 'Late Show with David Letterman' at...

David Letterman is set to kick off the new series of ABC's 'The View', by making his first-ever appearance on the show. On September 7th, Letterman will guest on the talk-show which will include surprise musical performances, celebrity video messages, and medical advice. His appearance is part of 'The View's' 'Welcome Back Barbara' week in reference to host Barbara Walters, who is set to return to the show after undergoing heart surgery.
Despite guesting on 'The OPRAH WINFREY Show', and 'Live with Regis and Kelly', Letterman has never appeared on 'The View'. His own talk-show career dates back to 1983, when he began hosting 'Late Night with David Letterman'. He recently signed a contract extension with CBS which will see the 63-year-old continue hosting until 2012.
Letterman's guest-spot will feature in the show's fourteenth season, and executive producer Bill Geddie said in a statement, "Fourteen seasons is quite an accomplishment, considering I wasn't sure at the beginning if we'd last 14 weeks." He added, "This is shaping up to be another exciting year for 'The View.' Right out of the gate we've planned a spectacular homecoming of sorts for Barbara's much-anticipated return, followed by our 3,000th show. As fall approaches we set our sights towards another political season with an emphasis on women in politics."