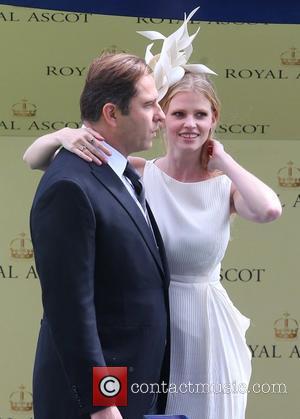 David Walliams and Kelly Brook were amongst the star-studded names at Elton John's White Tie and Tiara Ball in London this week, though it was the Little Britain man's canine friend who stole the show.
Walliams rolled up to the fundraising event with wife Lara Stone and his faithful border terrier Bert, who predictably got all the attention from the celebrity guests. The dog strutted around the party wearing a mini-tuxedo, and Walliams had drummed up anticipation for his arrival by tweeting a snap of Bert in his car, on the way to the party. The celebrity couple hate to be away from their beloved pet, and earlier this month treated Bert to dinner at the exclusive George's restaurant in Mayfair. Kelly Brook probably didn't expect to be playing second fiddle to Walliams' dog, and tweeted before the bash, "So Excited about the White Tie and Tiara Ball tonight!! Wearing the most insane earrings!". The British model didn't seem to mind however, later being snapped laughing and joking with Lara.
Other guests at Elton and partner David Furnish's bash - which fell on a perfect summer evening - included Grace Jones, Naomi Watts, Louis Walsh and Glee star Matthew Morrison. The couple have been hosting the annual event since 1999, with all proceeds of the evening benefitting Elton's Aids foundation.