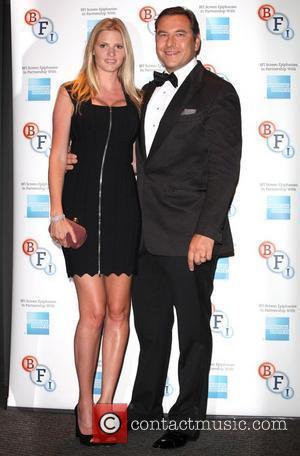 Picture: Lara Stone and David Walliams The Screen Epiphanies series continues with David Walliams introducing 'The Spy Who Loved me' at the BFI Southbank - Photocall...

David Walliams - the popular comedic actor - and his model wife Lara Stone are expecting their first child together. The 41-year-old Little Britain star broke the news on Twitter yesterday (November 15, 2012), a message that was subsequently re-tweeted over 3,000 times.

"Some wonderful news. My beautiful wife Lara is pregnant. We are having a baby! It is due next year and we both couldn't be happier. Dx," Walliams told followers. An official statement reported by The Telegraph read, "We're very excited to announce we are expecting our first child. We're both absolutely thrilled but ask you to please respect our privacy during this precious time." The couple married at Claridge's Hotel in central London two year ago, since which David has fronted the ITV1 reality show Britain's Got Talent. Earlier this year, he admitted to battling depression and spoke of how he tried to commit suicide several times before meeting his current wife.

The baby will certainly be a welcome addition to the family, though will he or she take priority over Walliams' beloved dog Bert? Stone, 28, has previously joked on Twitter, "A baby will probably never be as fun as Bert."