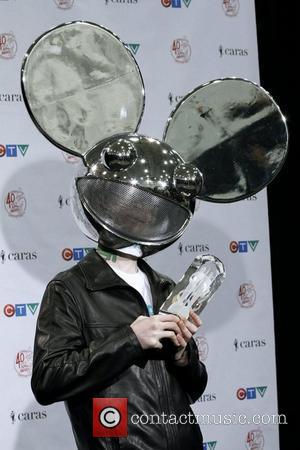 Deadmau5 and Skrillex; what a pair of jokers - you'd think that the occasion of the biggest music awards show of the year might get to the two producers a little, but the pranksters instead saw it as a stage to play out some vintage horseplay with Deadmau5 undoubtedly coming on top by appearing at the ceremony with his pal's mobile phone number printed on the t-shirt he was wearing.
The first news of the prank came on Twitter - as most things tend to these days - as Deadmau5 tweeted on Skrillex picking up the Grammy for Best Remix "Congrats to skrillex for the best remix grammy :) can't say I'm not proud," all well and lovely - except then he followed with "But skrillex, doesn't mean you're safe from getting the ultimate mau5 trolling experience :) prepare! ;) hahaha love u!"
Who knows whether the fast-rising dub-step producer saw that Tweet, if he did he'd be sure to have been worried, and any fears were confirmed when his friend appeared on TV wearing attired printed with his personal phone number on and the phrase "u mad bro?" underneath. "Haha deadmau5 just wore my phone number on his fokin shirt on tv gotta retire this phone," replied Skrillex who Tnt Magazine then claimed tried to get his own back on the mouse-hat wearing artist by setting up a call forwarding to his phone. Deadmau5 is evidently some sort of pranking King however, and had already told his phone company not to allow such a thing. Dastardly!