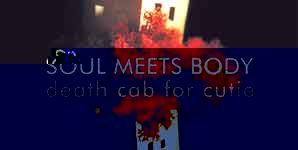 'Soul Meets Body' is the first single to be taken from Death Cabs stunning new album 'Plans'. The single Is due for release on September the 26th and will only be available on 7". The single also includes the track 'Jealousy Rides With Me'.

'Plans' is the Seattle quartets fifth album, recorded over 28 wintry days in early 2005 at Longview Studios, housed in a converted barn in Massachusetts. Chris Walla, as always, served as producer. 'Plans' is a shockingly beautiful and mature album from a group that itself is still maturing. Death Cab for Cutie is that rare band that aren't afraid to tackle the big thought, to wrestle with the complex, never black and white realities of human interaction. From its soaring beginning to its somber end, 'Plans' is the sound of growing up, of gaining friends and losing them, of realising, perhaps for the first time, the weight and consequences of every decision we make, of every heart we touch. It is an album about growing old that can grow old with us.