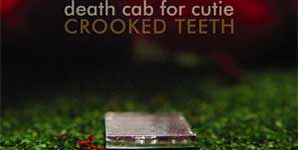 Death Cab for Cutie release the single 'Crooked Teeth' on 10th April 2006 through Atlantic Records. The single is taken from their new album 'Plans', the Seattle quartet's fifth album, recorded over 28 wintry days in early 2005 and released in August of last year. Last year was an amazing year for Death Cab for Cutie. They enjoyed incredible success in the States where 'Plans' debuted at number 4 on the Billboard album chart.

Death Cab for Cutie formed in the mid '90s in the tiny college town of Bellingham, Washington when ace engineering student and committed indierocker Ben Gibbard turned a freshly broken heart into nine songs he wasn't embarrassed to share with someone else. He quickly hooked up with fledgling four-track producer (and fellow Teenage Fanclub fan) Chris Walla and bassist Nick Harmer, the most amiable (and comic-book obsessed) musician on campus. Christened Death Cab for Cutie (referencing a '60s song by Monty Python associates the Bonzo Dog Doo Dah Band) the band released a cassette which led to a Seattle-area buzz which in turn led to a record deal with burgeoning area indie Barsuk. After a series of albums and tours each more successful than the last the three primary members of DCFC looked around and realised this wasn't a college extracurricular anymore, this was life.

The band have just completed a sell-out tour of the UK which included two dates at The Astoria, all dates on the tour were upgraded due to speedy ticket sales. They kick off a co-headline tour with Franz Ferdinand in the States next week and then they're back on UK soil to play 2 more shows in June:
June 2006
Tues 27th LEEDS University
Wed 28th LONDON Brixton Academy