Picture: Deepak Chopra and son Gotham Chopra Celebrity moms and dads join Mallika Chopra for a party in Crestwood Hills Park to celebrate the launch of...

Writer and thinker Deepak Chopra has exploded the myth that his friend MAHARISHI MAHESH YOGI fell out with THE Beatles over a secret romance by insisting the Indian guru simply grew tired of the Fab Four's drug use.

Neither The Beatles nor the Maharishi have spoken about their bitter falling out, leading many to speculate about the reasons for the bust-up.

Some of those close to both The Beatles and the Maharishi have claimed the guru propositioned a friend of the group - possibly actress MIA FARROW - prompting John Lennon and George Harrison to leave India and cease communications with their former spiritual advisor.

But Chopra now insists the Maharishi simply "lost his temper when he learned they were doing drugs".

Chopra adds, "The rumour was that Maharishi had misbehaved with Mia Farrow, but I met Mia years later at the airport while taking a flight to India, and she asked me to tell Maharishi that she still loved him."

Meanwhile, during his guest editor stint for the Times of India newspaper on Tuesday (14FEB06), Chopra also revealed he helped set up a top secret reconciliatory meeting between the Maharishi and Harrison in 1991.

He recalls, "We got on to a chartered plane... and flew to Vlodrop in the Netherlands, where Maharishi was staying."

Chopra recalls it was an emotional meeting, during which Harrison apologised to the Maharishi for severing ties with him.

The Maharishi brought Harrison to tears, according to Chopra, when he forgave his former student, stating, "I knew the Beatles were angels on earth... I could never be upset with angels." 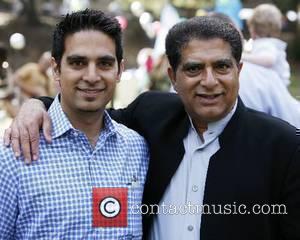