Demi Lovato Has Discovered A Way Of Dealing With Past Self-harming Issues Whenever She Feels Anxious Or Low - She Sits On Her Hands. 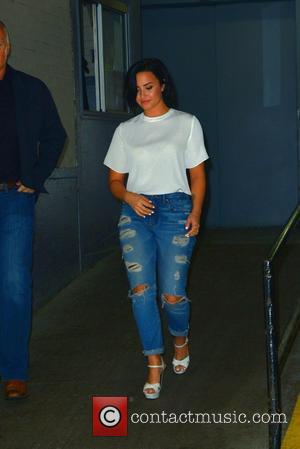 The pop star has become an advocate for good mental health after she checked in to rehab for a series of problems linked to her bipolar disorder battle, but she reveals it's still a daily struggle to live what she calls "a normal life" and not relapse.

However, she admits she has found a few tricks to help her cope when the going gets tough.

Lovato explains, "I've actually learned how to overcome those feelings without drugs and alcohol... and I now live well, even though I have bipolar disorder.

"Every day I have to remind myself that I have an addiction and that I have suffered in the past from an eating disorder and that I have to take the steps that are required for my bipolar disorder in order to live a normal life... It is not something that I forget about."

And whenever life gets a little overwhelming for Lovato, who used to cut herself at the height of her problems, she has found a really good way of coping, adding, "Now I sit on my hands if I have to and just say, 'There's nothing I can do in this moment to change the circumstances in my life'."

And that mantra came in really useful when her dad lost his battle with cancer in June, 2013.

The Heart Attack singer tells news show Access Hollywood, "When my father passed away... I was like, 'There's absolutely nothing I could do. I could take drugs, I could self-harm, I could do all these things, but nothing is worth doing; I've done them all (and) it doesn't fix everything. So I just sat through it and I felt for the first time, and I think that's so much more empowering when you are able to feel something."