Demi Lovato broke her strict diet to eat pizza at Robert Rodriguez's house because she didn't want to upset her host or his special guest, President Barack Obama. 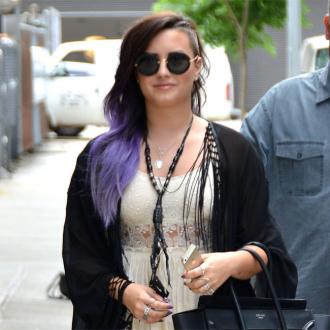 Demi Lovato had to break her strict diet so she didn't offend US President Barack Obama.

The 'Skyscraper' hitmaker usually sticks to a raw food, gluten-free eating regime because of allergies to wheat and dairy, but didn't want to offend host Robert Rodriguez or his special guest at a party at the filmmaker's Texan home last month.

She told 'Extra': ''I try to eat raw food whenever possible. I don't eat it all the time just because I'm the type of person that if I do something, if I go all one way, I get burnt out...

''I'm gluten-free and dairy-free because I'm allergic to them. I just eat vegan and raw as much as possible and it's really changed my body and made me feel better.

''But you kind of can't turn down pizza that Robert Rodriguez handmade - and that you are also eating with the president.''

Demi also admitted she was left embarrassed by her chat with the commander-in-chief that night - but ended the conversation bursting with pride thanks to his kind words.

She explained: ''I reminded him that we'd met before. I sang at Christmas in Washington. He said, 'I know who you are. You're a mega-star, you think I'm stupid?' I was like, 'No Mr. President, I'm so sorry, you're not stupid!'