Demi Lovato has transformed her look once again by dying her hair a combination of lavender and grey ombré. 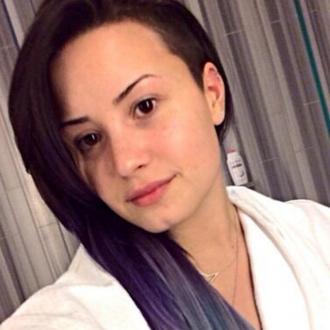 Demi Lovato has dyed her hair purple and silver.

The 21-year-old singer has added to her long list of rainbow-hued hairdos by transforming her tresses into an on-trend combination of lavender and grey ombré.

Perhaps taking cues from Kelly Osbourne, the chameleon-like star surprised fans by coming up with a shade she hasn't tried before.

Sharing a series of snapshots of the look on Twitter, Demi teased her new hair colour to her followers ahead of her appearance on NBC's 'Seth Meyers' show last night (04.06.14).

Making a tongue-in-cheek reference to two of her most popular song titles, she tweeted: ''Lavender/silver ombre. I know I said I was gonna give my hair a break but.. I #REALLYDONTCARE.''

This year alone the 'Neon Lights' hitmaker has sported a brunette/blond ombré look, experimented with a half-shaved head and boasted neon pink hair.

Last December she went blue and she was previously blonde for a few months, but that didn't stop her from trying out different shades of bright dip dye on her ends.

Former Disney star Demi has been experimenting with her style since beating the demons that plagued her throughout her teens, which led to her being treated for eating disorder, self harm and addiction.

She recently said: ''To me, sexiness stems from being confident and comfortable in your own skin.''