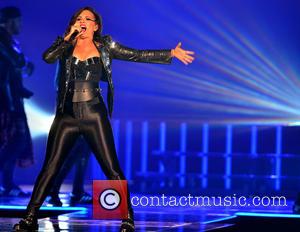 Demi Lovato is sporting a sling after injuring her arm in a fall shortly before she was due on stage in Texas.

The pop star shared a picture of her arm in a protective sling on Twitter.com before her gig in San Antonio on Friday (19Sep14), writing, "Welp. Looks like I won't be playing guitar, piano Or drums tonight. San Antonio... Why did you have to go and make me fall so hard for you?!! (sic)"

The snap sparked fears Lovato had suffered a nasty break which would take months to heal, but a representative for the star has now confirmed the injury is not that serious, telling Gossipcop.com, "She fell and hurt her arm, but it's not broken."