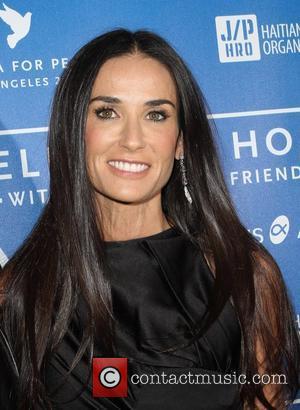 Demi Moore is going for the jugular! Despite being worth more than ex-husband Ashton Kutcher, Demi is looking to rinse the actor for far more than he expected to give away. Sources tell TMZ.com that she has demanded spousal support from Ashton, which is unsurprising given she got $15 million belatedly from Bruce Willis in connection with their divorce.

Furthermore, Demi wants Ashton to help pay for the renovations to her New York apartment, something that he's unwilling to do. The swanky place, in the San Remo building, is worth somewhere in the region of $25 million and $40 million. Demi is also pretty upset that Ashton got involved in a lucrative online business and she feels entitled to part of it. However, he signed up after they split so it's almost certain that Moore won't be able to get her hands on any of the shares of profits.

Sources say Ashton is willing to pay out to end the long and drawn out divorce battle, though the question is - how much? Demi reportedly scored a huge amount from Bruce Willis, getting an alleged $90 million in total. Her net worth is somewhere in the region of $150 million, though Ashton is only just behind with $130-140 million. That could increase dramatically with future movie projects, renewals of Two and a Half Men and his social media ventures.

Insiders privy to talks say the couple could settle as early as next month. Ashton Kutcher [L] Has Been In London Recently, While Ex-Wife Demi Moore [R] Has Been Tying Up The Details Of Her Divorce Battle