Demi Moore is said to be ''despondent'' about the path her acting career has taken in the last 18 months. 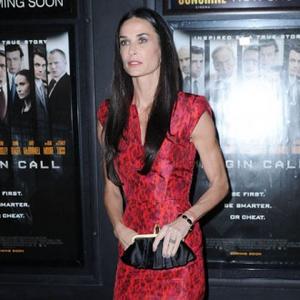 Demi Moore is said to be "despondent" about her acting career.

The 49-year-old star - who was hospitalised last week after she suffered a seizure - is reportedly "very, very unhappy" about the path her acting career has taken in the last 18 months and it is thought she has tried to increase her chances of landing a hit movie role by spending time with her 23-year-old daughter Rumer and her friends.

A source close to the actress - who has starred in 'Ghost', 'Indecent Proposal', 'Striptease' and 'Charlie's Angels' - told RadarOnline: "Demi is very, very unhappy with her acting career.

"Demi is despondent because she feels that her career has stalled. It's been a very long time since Demi was the marquee star that would open a movie.

"One of the reasons that Demi is obsessed with being young is that she feels if she is seen out with her daughter and Rumer's friends that might help increase her chances of being offered a role that might go to a younger actress."

The brunette beauty - who split from husband Ashton Kutcher in November amid speculation he had cheated on her - finished filming her latest movie 'LOL' last year, but insiders believe she doesn't have "any future projects lined up".

It has also been claimed that Demi has refused to enter rehab, despite being urged by daughters Rumer, Scout, 20, and Tallulah to seek help after she suffered a seizure.