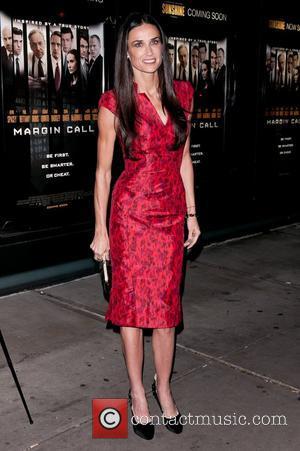 Demi Moore appeared "gaunt and pale looking" at the red carpet premiere of her new movie Margin Call on Monday evening (17th October 2011). Wearing a luxurious red dress, the 48-year-old failed to detract attention from her skinny frame while posing with stars Kevin Spacey and Paul Battany, reports the UK's Sun newspaper.
The Hollywood star's marriage to Ashton Kutcher has been rocked after 22-year-old Sara Leal claimed she slept with the Two and a Half Men star in his hotel suite in San Diego. The actress has rarely been spotted in public since speculation began, but appears to have shed "a dramatic number of pounds" in the past few weeks. Earlier this month, the couple were spotted on a camping trip together in Santa Barbara, California, and were later photographed leaving the Kabbalah centre in Los Angeles. It was claimed the 'Ghost' actress, who was previously married to Bruce Willis, took legal advice last Friday about ending her marriage and splitting the couple's reported $200 million fortune. Despite the furore, Moore was all smiles at the Margin Call premiere in New York this week. The movie takes place over a 24-hour period at a large investment bank, loosely based on Lehman Brothers, and specifically focuses on a group of employees and their behaviour during the recent financial crisis.
Moore will next appear opposite teen stars Miley Cyrus and Ashley Greene in 'Lol', a comedy about the peer pressures of high school romance in the age of Facebook, Twitter and YouTube.