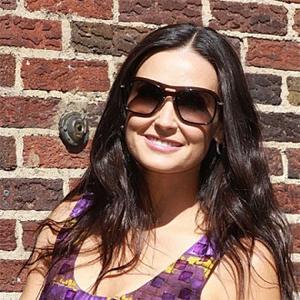 The 48-year-old actress kept embracing Colin Owens on the set of her 32-year-old spouse's new movie 'No Strings Attached' because they looked so alike from behind.

Colin - who also worked alongside Natalie Portman in the romantic comedy - said: "More than once on the set Demi has come up behind me and you know, hugged me thinking I was Ashton because we were dressed the same."

However, Colin revealed Demi always realised her mistake and never tried to kiss him, and insisted he would never have reciprocated her gestures.

Asked by website HollywoodLife if he was tempted to make a move back, Colin added: "No! She's a great woman. She's a friend . so, no."

Ashton, meanwhile - who wed Demi in 2005 - admits their marriage works because they are both actors.

Asked if his wife ever got jealous over his sex scenes with Natalie, he said: "No, the beauty of my relationship is that we are both actors so we both understand what we have to do at work and what that entails so it's a good thing being married to an actress!"

The handsome star recently admitted he is always working hard at his marriage - and likes to use social networking websites to send affectionate messages to his spouse.

He said: "Sending sweet nothings on twitter or Facebook is fun. In some ways, it's no different than sending flowers to the office: You are declaring your love for everyone to see. Who doesn't like to be publicly adored?"