Demi Moore has been rushed to hospital to seek professional help for ''exhaustion'', and is said to be looking to improving her ''overall health''. 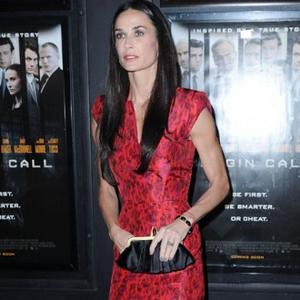 Demi Moore has been rushed to hospital to seek professional help for "exhaustion".

The 49-year-old actress - who filed for divorce from Ashton Kutcher, her husband of six years, in November, after he was accused of cheating on her - is now working toward improving her "overall health".

Her representative said in a statement: "Because of the stresses in her life right now, Demi has chosen to seek professional assistance to treat her exhaustion and improve her overall health.

"She looks forward to getting well and is grateful for the support of her family and friends."

Paramedics were called to the Los Angeles home of the star on Monday (23.01.12) night and after a 30-minute assessment, Demi was rushed to a local hospital, TMZ.com reports.

Matt Spence, spokesperson for the Los Angeles City Fire Department, said: "I can confirm that we received an emergency call at 10:49 p.m. for an unknown illness related to that address.

However, sources have told E! News the mother-of-three was "shaking" and "acting like she was suffering from a seizure".

In light of the incident, Demi's representative also confirmed she has dropped out of the upcoming Linda Lovelace biopic, in which she had been cast as feminist icon Gloria Steinem.

Demi recently admitted in the wake of her relationship with Ashton coming to an end, she has become scared she is "not worthy of being loved".

She said: "What scares me is that I'm going to ultimately find out at the end of my life that I'm really not lovable, that I'm not worthy of being loved.

"That there's something fundamentally wrong with me and that I wasn't wanted here in the first place."