Demi Moore is supporting Rumer Willis following her split from Jayson Blair and was spotted cheering her daughter on as she performed in Hollywood on Tuesday night (05.11.13). 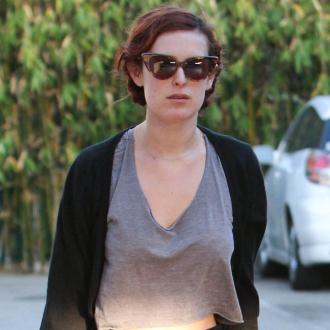 The 25-year-old actress, who recently broke up with her 'The New Normal' star boyfriend, 29, after 17-months of dating, has been spending lots of time with her mother to get over her heartbreak.

A source told People.com that the budding singer put on a brave face to perform her weekly slot at Sayers Club in Hollywood on Tuesday night (05.11.13) and a ''refreshed and vibrant'' Demi, 50, was on hand to show her some love.

The insider said: ''Rumer seemed really happy that her mother had come out to support her. Right after she got off stage, the two had a really sweet mother-daughter moment.''

An eyewitness also said Demi clapped and whistled enthusiastically after each song her daughter sang, including a cover of Miley Cyrus' hit 'Wrecking Ball'.

The mother and daughter later took to the dance floor together before leaving with friends.

A source previously claimed that Rumer and Jayson's relationship was getting serious after he joined her and her family, including her father Bruce Willis and his wife Emma Hemming, at her sister Scout's graduation from Brown University in May.