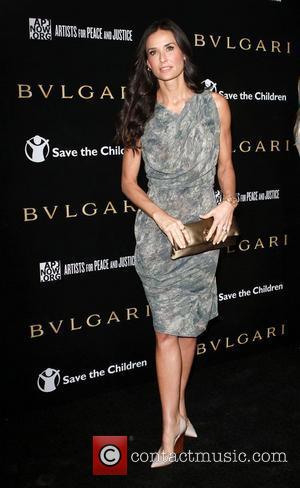 Demi Moore is set to direct a short breast cancer awareness movie, titled 'Project Five'.
Demi Moore, the American actress and star of 'Ghost' and 'Disclosure', is set to team up with the likes of Alicia Keys and Jennifer Aniston, who are all creating individual short films exploring the impact of breast cancer on people's lives, reports Variety.'Project Five' will be an anthology of short films, each one directed by a different celebrity. Moore, Aniston, Keys, Patty Jenkins have signed up to the project and a yet to be named fifth filmmaker will also join in the near future. 42-year-old Aniston, who recently starred in the hit comedy movie 'Just Go With It', will act as executive producer with her 'Friends' colleague Martha Kauffman. The movies are to be aired on 'Lifetime' and the network's President Nancy Dubuc said, "I'm a big fan of this amazing group of powerful and creative women, and we are thrilled to be working with them on 'Project Five'. It's an awesome feeling to be able to give them such a strong platform to do what they do best - entertain and tell great stories - so that we all educate viewers about breast cancer through these five films of courage, love and hope". Moore produced and starred in a similar project back in 1996, HBO's 'If These Walls Could Talk', which explored the subject of abortion.
Demi Moore recently completed work on the forthcoming comedy movie 'Lol', about high school romance and friendship in the world of social networking. The film also stars Miley Cyrus and is scheduled to hit screens in October 2011.