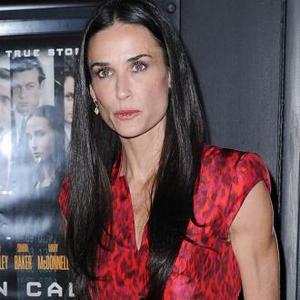 The 49-year-old 'Ghost' actress - who called time on their six-year marriage last November following allegations he had cheated - apparently wants to give it another go.

But having just been released from rehab - where she is believed to have been treated for addiction and an eating disorder - friends are worried she will make herself ill again in the process.

A source said: ''Demi definitely isn't over him yet. Her mood right now relies solely on Ashton and how responsive he is to her messages and phone calls.

''If he doesn't message her back for a couple of hours or seems distant in a text, she starts freaking out. While she won't admit it, she is still completely infatuated with him and it's clear she wants him back.''

Ashton, 34, is said to have visited his estranged wife during her treatment, although the insider claims the meeting did more harm than good.

Talking to Grazia magazine, the source said: ''Demi is her own worst enemy, because she was doing great in rehab until Ashton came to visit her.

''He didn't actually make it down until a couple of weeks ago, after promising to go numerous times before that. As everyone expected, his visit really threw her off and she went from being relatively calm to very anxious and edgy.''